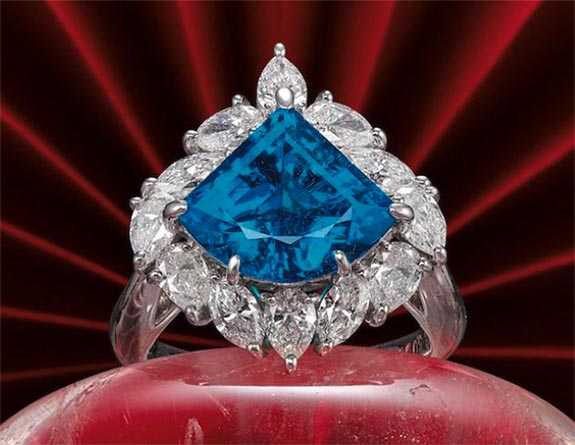 The modified shield brilliant-cut gem was the most anticipated lot of the event because a stone of this color, size, quality and origin is a unicorn in the world of colored gemstones. Faceted specimens larger than a few carats are virtually unheard of.

To put the rarity of such a large intense blue Paraiba tourmaline into some perspective, note that the Smithsonian has one in the National Gem Collection in Washington, DC. It's an oval-cut gem and weighs a mere 1.22 carats.

"Paraiba" is the most prized tourmaline variety. The vivid teal, turquoise and neon blue stones caused a sensation when they were first discovered by prospector Heitor Dimas Barbosa in Brazil’s tropical, coastal state of Paraiba in 1989.

Worldwide demand sparked a mining frenzy and, within five years, the supply beneath “Paraiba Hill” — an area measuring 400 x 200 x 65 meters — was largely tapped out.

Bonhams explained that Paraiba tourmalines are typically seen in smaller carat sizes because the crystals mined at their original source were extracted from pencil-thin veins. The material was delicate and prone to splintering or fragmenting during the mining process.

Common tourmalines come in a rainbow of colors, which are determined by the trace amounts of iron, manganese, chromium or vanadium in their chemical makeup. Paraiba tourmalines are different. They owe their spectacular blue hues to a high concentration of copper, an element not previously seen in tourmalines.

Bonhams noted that while traditionally mined in Brazil, copper-bearing tourmalines have been discovered in both Mozambique and Nigeria.

Some gem experts believe that the uncanny connection can be attributed to continental drift, the theory that the Earth’s continents have moved over geologic time and that South America and Africa were once connected. Paraiba, on the far eastern tip of Brazil, would have been adjacent to the west coast of Nigeria.

“Thus we may suppose that the radiant copper tourmalines from Nigeria came into being under the same conditions as those from Paraiba, at a time before the ancient continent drifted apart,” writes the International Colored Gemstone Association on its Paraiba Tourmaline web page. “Is that the reason why it is so difficult to tell one from the other? This remains one of the great riddles in the fascinating world of gemstones.”