One of the world’s most unusual examples of February’s birthstone is this 172.23-carat parallelogram-shaped amethyst that boasts a fancy "staircase cut" on the pavilion. (That's the slanted lower portion of the gem just below the girdle). 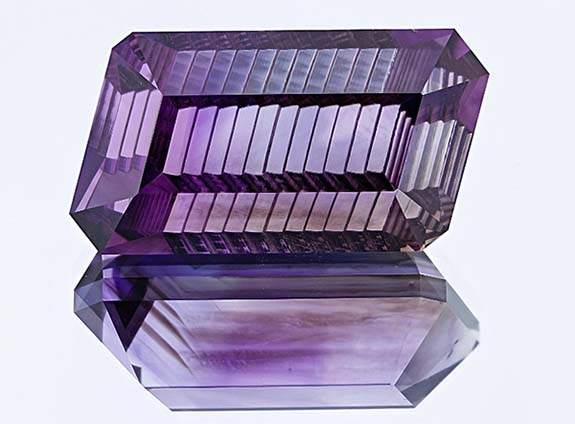 Sourced at Hallelujah Junction, Nev., just 30 miles north of Reno, this impressive stone is the first from that locality to join the National Gem Collection at the Smithsonian’s National Museum of Natural History in Washington, D.C.

The Smithsonian's mineral and gem collection consists of approximately 350,000 mineral specimens and 10,000 gems, making it one of the largest of its kind in the world.

While amethysts traditionally have been sourced in Brazil, Uruguay, Zambia, Mexico, Italy and Germany, the U.S. and Canada are also credited with producing some of the finest-quality purple stones.

Amethyst is the most coveted variety of quartz, which is clear in its pure state. Amethyst gets is purple color from a few atoms of iron displacing some of the silicon in the gem’s molecular structure. These traces of iron can give amethyst a wide range of colors, from almost white to deep purple.

Coveted for thousands of years, Amethyst is one of the oldest recorded gemstones. They’ve been recovered from ancient Egyptian tombs and were prized by the Greeks, Romans, Babylonians and Hebrews.

Amethyst gets its name from the Greek word “amethystos,” which literally means “not to intoxicate.” Apparently, the Greeks believed amethyst could reverse the effects of drunkenness. Medieval soldiers wore amethyst to protect themselves in battle. Other cultures believed February’s birthstone would bring good fortune, inspire their intellect, heal their illnesses or bolster their immune systems.

The color rating of an amethyst is determined by its hue, tone and saturation. Hue is the color; tone is relative lightness or darkness of the color; and saturation relates to the color’s intensity, from dull to vivid.