A tiny gold coin depicting the Roman ruler Allectus crushed pre-sale estimates as fierce bidding at the headquarters of London auctioneer Dix Noonan Webb (DNW) catapulted the price to $695,000. DNW had predicted the coin would fetch between $90,000 and $127,000. 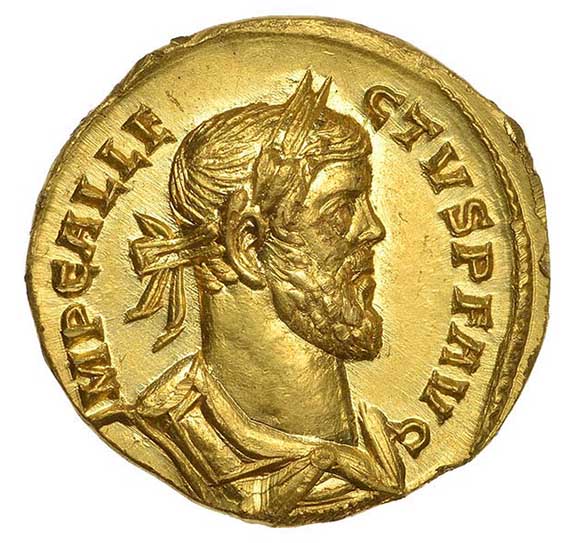 The news came as a sweet surprise to the 30-year-old amateur metal detectorist, who discovered the 1,700-year-old coin in a plowed field near Dover, England, back in March. The field is adjacent to the site of an ancient Roman road.

“I cannot believe it, we are ecstatic!" exclaimed the detectorist, who wished to remain anonymous. "We expected it to sell for a little over estimate, but not five times the estimate! We are sharing the money with the farmer, who is also thrilled!” 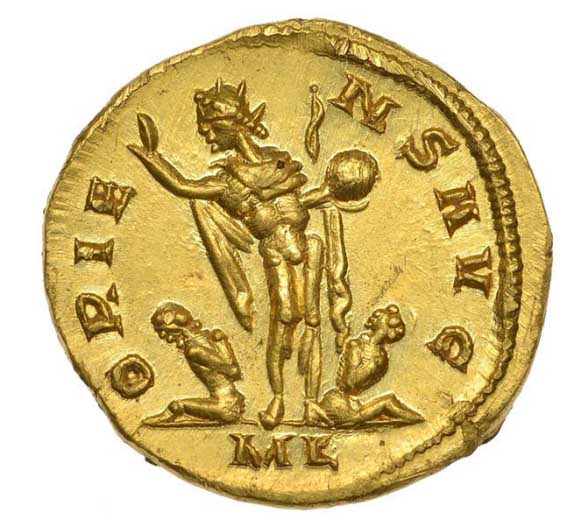 The solid gold coin, known as an aureus, is just slightly larger than a penny and weighs a mere 4.31 grams (0.15 ounces). The obverse features a portrait of Allectus and the reverse depicts two kneeling captives at the feet of the god Apollo.

Based on today's spot price for gold, the intrinsic value of the coin is about $200, but the hammer price reflects its extreme rarity.

There is only one other coin in existence that was struck with the exact die that produced the Allectus coin sold at auction — and that specimen resides in the British Museum. Allectus ruled Briton and Northern Gaul from 293 AD to 296 AD and it is believed the coinage bearing his image was demonetized and melted down after his untimely death in battle. Today, only 24 aurei of Allectus are known to exist worldwide.

Recognizing the extreme rarity of the Allectus coin, eager bidders at the Dix Noonan Webb venue, on the internet and via telephone challenged each other for the prize. An anonymous private collector bidding by phone was the eventual winner.

“I am delighted with the phenomenal price achieved in today’s sale," said Christopher Webb, Director and Head of DNW’s Coin Department. "This is the most expensive coin that we have ever sold at Dix Noonan Webb. It is the most money ever paid for a coin of Allectus and it is now the most valuable Roman coin minted in Britain to have been sold at auction.”

At first, the detectorist believed he had found a fairly common gold sovereign, but after bringing his discovery to the attention of British authorities, which is demanded by law, he learned that his coin was truly extraordinary. The British Museum compared it to its own specimen, which had been unearthed in the 1800s in Hampshire. The museum's Allectus coin and the newly found treasure matched exactly.