Remember the name "Lulo Rose" because this 170-carat rough pink diamond has the potential to become one of the most celebrated gemstones of all time. 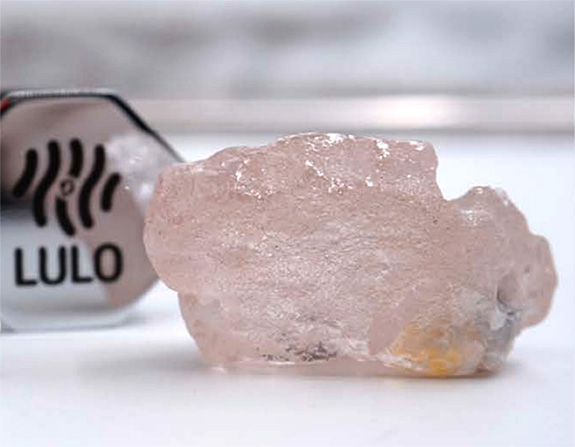 Discovered by Lucapa Diamond Company at its Lulo alluvial diamond mine in Angola, the Type IIa, chemically pure specimen is believed to be the largest pink diamond discovered anywhere in the world during the past 300 years. Only the 182-carat Daria-i-Noor, unearthed in India during the 17th century, weighs more.

At this juncture, there's no telling exactly what type of finished stone will emerge at the cutting wheel but, historically, rough diamonds will lose about 40% to 60% of their original carat weight during the cutting and polishing process. If that turns out to be true, the finished pink diamond could weigh upwards of 70 carats and establish a new the record for the highest price ever paid for a pink diamond, or any gemstone for that matter.

In 2017, Hong Kong-based jewelry retailer Chow Tai Fook Jewellery Group paid a record $71 million for the 59.6-carat Pink Star. The stone was later renamed the CTF Pink Star and remains the priciest gem of all time.

The Lulo Rose is unique because it is an alluvial diamond — a diamond eroded over eons from its primary source and discovered in a secondary location. Since the discovery of alluvial diamonds at Lulo in 2015, geologists have continued to seek the kimberlite pipes that would have been the primary source of these spectacular stones.

The Lulo Rose will be sold via international tender in what's expected to be a closely followed event conducted by Sodiam E.P, the Angolan State Diamond Marketing Company.

“This record and spectacular pink diamond recovered from Lulo continues to showcase Angola as an important player on the world stage for diamond mining and demonstrates the potential and rewards for commitment and investment in our growing diamond mining industry,” said Diamantino Azevedo, Angola’s Minister of Mineral Resources, Petroleum and Gas.

According to Lucapa, the historical pink diamond is the fifth largest diamond discovered at Lulo. It's also the 27th 100-plus-carat diamond recovered at the site.

The largest diamond ever recovered in Angola was souped at the Lulo mine. In February of 2016, Lucapa unearthed the 404.20-carat rough named “4 de Fevereiro.” That gem was eventually cut into a 163.41-carat emerald-cut diamond that was sold for $33.7 million at Christie's Geneva in 2017.